Mexican Hooker #1 and My Other Roles Since the Revolution (2016) 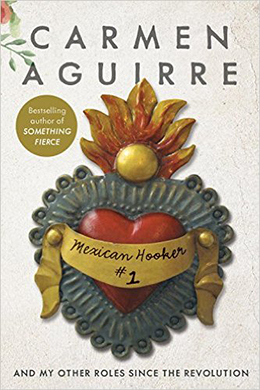 “In her pursuit of art in the everyday, in Vancouver's basement theatre scene though also her own marvellous writing so much in evidence here, Aguirre finds expression, but also a way forward – examining her own behaviour ruthlessly, discovering kinship with First Nations, and using the sum of these experiences to transcend the violence of a rape that might have ruined any other child. This is extraordinary and, often unexpectedly, beautiful reading.” - Noah Richler, author of This Is My Country, What's Yours? A Literary Atlas of Canada and What We Talk About When We Talk About War.

Mexican Hooker #1 and My Other Roles Since the Revolution will be published on April 12th, 2016. It is on The Globe and Mail's, The Ottawa Citizen's, Quill & Quire's, and 49th Shelf's most anticipated books of 2016 lists.

Carmen Aguirre has lived many lives, all of them to the full. At age six she was a Chilean refugee adjusting to life as a Latina in North America. At eighteen, she was a revolutionary dissident married to a generous-hearted man she couldn't fully love. In her early twenties she fought to find her voice as an actor and to break away from the stereotypical roles thrust upon her – Housekeeper, Hotel Maid, Mexican Hooker #1 – all while navigating the complex paths of lust and heartbreak. As she grew into her career, Aguirre became a writer, a director, an actor, and then a mother, but among her many multi-faceted identities was another that was unbearable to embrace yet impossible to escape: the thirteen-year-old girl attacked by one of Canada's most feared rapists. Thirty-three years after the assault that shook her world, Aguirre decided it was time to meet the man.

Fierce, funny and enlightening, Aguirre interweaves her account of overcoming the attack with a host of stories of life and love. From her passionate but explosive relationship with a gorgeous Argentinian basketball player to the all-consuming days at drama school in Vancouver; from the end of the Chilean revolutionary dream to life among the Chicano theatre scene of Los Angeles; from the child who was made the victim of a terrible crime to the artist who found the courage to confront her assailant, Aguirre tells a story of strength and survival that will leave you speechless.

Something Fierce: Memoirs of a Revolutionary Daughter (2011) 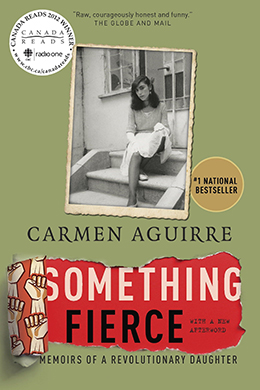 “The adventurous, exhilarating and all too often harrowing adolescence and early adulthood of one extraordinary person.” National Post.

Something Fierce: Memoirs of a Revolutionary Daughter won CBC Canada Reads in 2012, was nominated for several national and international awards, and is a #1 national bestseller.

Six-year-old Carmen Aguirre fled to Canada with her family following General Augusto Pinochet's violent 1973 coup in Chile. Five years later, when her mother and stepfather returned to South America as members of the Chilean resistance, Carmen and her younger sister went with them, quickly assuming double lives of their own. At just eighteen years old, Carmen became a militant herself, plunging further into a world of paranoia, terror, and euphoria.

Something Fierce takes the reader inside war-ridden Peru, dictator-ruled Bolivia, post-Malvinas Argentina and Pinochet's Chile in the eventful decade between 1979 and 1989, at the same time showing the beauty of these nations and the resilience of their people. Dramatic, suspenseful and darkly comic, it is a rare first-hand account of revolutionary life and a passionate argument against forgetting.